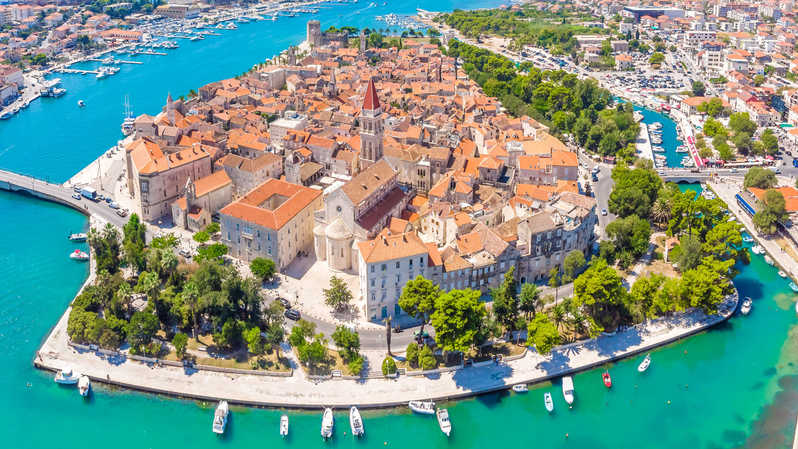 Book your place on one of our Split boat tours and have an unforgettable experience sailing from place to place and visiting the most beautiful parts of Dalmatia. If you are in Split and have already visited the whole city and are not sure what to do next, we have an idea for you!

In addition to the Blue Cave tour, we also have Blue Lagoon & Trogir boat tour, which will take you on sightseeing of one of the most beautiful small towns near Split, which is Trogir.
Trogir is a small town belonging to the Split-Dalmatia County, located just 25 kilometers from Split, which makes it an ideal place for excursions from the capital of Dalmatia. The town itself is divided into three parts: the land part, the part on the island of Ciovo and the islands Drvenik Mali and Drvenik Veliki.

Trogir also has a rich history that goes back to the 3rd. century BC when the area was first settled by Greek colonists from the island of Vis. The turbulent history of this city has influenced the development itself and its present appearance, which encompasses one of the best preserved Romanesque-Gothic forts. The historic core of the city is the castle and the tower surrounded by walls, and within the center there are many cultural and historical monuments such as the famous Trogir Cathedral, which is also the most significant cultural monument in the city. The core of the city, or the old part of the city, is listed on the UNESCO World Heritage List, making Trogir one of the most attractive cities in Dalmatia, along with Split and Dubrovnik.

Tourism itself began to develop in Trogir in the 1930s, when the city began to attract many visitors but also world figures from culture and politics. Trogir has never been a city that attracts because of the sun and the sea, but has exclusively been a city that attracts guests because of its cultural and historical heritage. Nautical tourism is very developed in the city itself due to the presence of two modern marinas that can accommodate over 500 boats, and adventure tourism is also being developed which includes diving, sports boats, parachutes and more.

Some of the most important sights in Trogir that you should not miss are:

1. Cathedral of Sts. Lovre – is the most significant monument among the churches in Trogir, and it covers the area that the faithful have visited since the Middle Ages. The cathedral was built in the 17th century, and the cathedral itself blends various styles dating from Romanesque, Gothic, Renaissance and Baroque, which makes the cathedral extremely specific.

2. Palaces – The city of Trogir has a large number of palaces located in the heart of the city, which beautify the city itself with its  facades and specific architecture. Some of the palaces you should visit are the Garagnin Romanesque and Gothic Palace complex, the Cipicco Romanesque Palace complex, the Municipal Palace and the Lucić Palace located on the waterfront.

3. Churches and monasteries – Trogir is also rich in religious strongholds, the most important of which are the monastery of Sv. Dominica founded in the 13th century, Our Lady of Mount Carmel Church, All Saints Church remodeled at the end of the 17th century, Church of St. St. Peter’s Church 13th Century John the Baptist Church of St. John the Baptist Sebastian from the 15th century, church of st. Barbara and the bell tower of the church of st. Michael, representing the rest of the demolished church and monastery.

4. The Kairos Collection – This art collection includes the Church of Sts. Nicholas emphasizes her stylistic features from Romanesque to Baroque. This church is an integral dip of a preserved Benedictine convent founded in 1064.

5. Forts and towers – Trogir includes the Kamerlengo fortress, which is located on the southwest corner of the island and was built in 1437 and the tower of St. Marko built in the 15th century.

Trogir is one of those cities that is best remembered with an expert tour guide, of course if you want to know all the historical details, but if you are just in the mood for sightseeing, Trogir is a place that will delight you with its cultural and historical heritage and a great selection of cafes and restaurants where you can take a break and enjoy the moment.

If you are looking to visit Croatian island and would like to book your place on one of our boat trip from Split, click the link below: