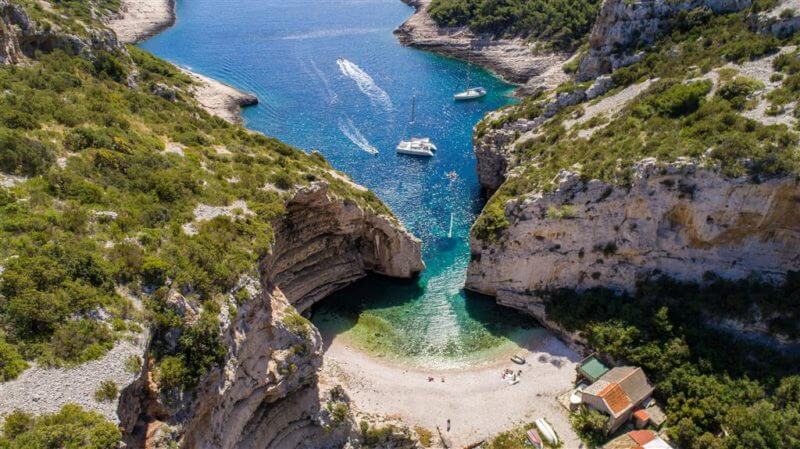 Croatia is a wonderful country that can provide every visitor with a variety of things when it comes to its tourist offer. Croatian tourism consists of many specific forms of tourism, so that every visitor can satisfy their needs whether it is active travel, business travel, vacation or recreation. One of the benefits that this country can provide to every visitor is the tourist offer, which encompasses the sea and the sun, but also the beautiful Croatian indented coast that stretches along the whole country. The Croatian islands are the most significant part of the country, because they are enriched with cultural and historical heritage but also natural attractions that will knock every visitor off their feet. One of the top ten Croatian islands is definitely the island of Vis, which is rich in cultural and historical heritage as well as natural attractions.

Vis is a Croatian island that is 45 kilometers away from the mainland, and the easiest and fastest way to get there is by private boat, excursion tours or regular lines from Split that operate two to four times a day. The climate on the island of Vis is Mediterranean, its only specificity is that it is exposed to stronger winds due to the fact that it is far away from other islands and the mainland and is more exposed than the neighboring islands. When it comes to the history of the island of Vis, it goes back to the prehistoric period when people first inhabited it.

This small island is located on the high seas and is extremely inaccessible due to its conical shape and steep coastline. The island is volcanic in nature and is full of endemic plants and animals and is a favorite bird habitat.

This island is located near Komiža, a small village on the island of Vis, and like the island of Jabuka is also volcanic. The island of Brusnik has beautiful beaches with dark pebbles and the panoramic view of the island will leave you breathless. Today, this island is home to many endemic species.

The Blue Cave is one of the biggest attractions in the area, because it is extremely geomorphologically interesting. It is known for having two openings, one larger that can only be entered by a small paddle boat, and a smaller opening on the other side of the cave, below the sea level, which allows sunlight to reflect from the seabed and create blue light. The Blue Cave is located on the island of Bisevo and is one of the favorite tourist attractions in the area.

This beautiful bay is located on the island of Vis and is on the list of top 10 beaches that you must visit when traveling to Croatia. It is located on the south side of the island, and can be accessed by boat through a narrow passage from the sea beyond which the bay widens and ends with a beautiful beach that can not be reached by road.

This cave is located on the island of Bisevo and is one of the geomorphologically most interesting attractions in the area, of course along the Blue Cave. Its opening through which it enters is extremely large, however, it shrinks inward. The cave is 160 meters long and represents the habitat of one of the most endangered mammals in the world, an extremely rare seal species – the Mediterranean monk seal.

This archipelago is one of the most remote islands in Croatia because they literally mark the border of the Croatian territory. Palagruza has many endemic plants and animals and the climate in this area is extremely dry with little humidity.

This cave is also called the Green Cave and is located on the island of Ravnik. It is an abrasion cave with two openings, one of which is at the top through which sunlight passes and bounces off the seafloor,  turning the walls green.

If you are in Split and looking for a day trip that includes a visit to several Croatian islands, we have the ideal boat trip from Split for you! Our Blue Cave tour from Split will take you to the islands of Bisevo, Vis, Hvar and Budikovac where you will have the opportunity to see some of the most beautiful natural attractions and have a panoramic view of the Pakleni Islands.

To book our Blue Cave tours, click the link below!