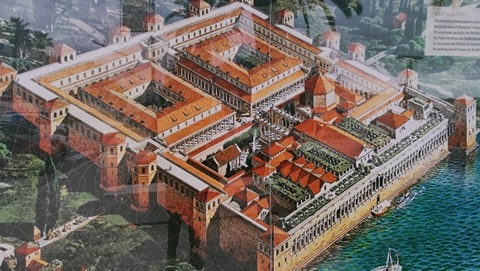 A strict center of the old part of Split – Diocletian’s Palace! The best-preserved monument of the Roman Empire in the World! A place to be!

Diocletian’s Palace is a cultural monument that the people of Split are most proud of. Today the palace is a strict center of the old part of Split where people still live. Perhaps that is what fascinates every tourist who wanders the narrow streets that have been here for more than 1700 years. What is the most important – this is currently the only palace in the world that people live in!

Diocletian Palace is one of the best-preserved monuments of Roman architecture in the world.Precisely because of all these great beauties and historical values, Diocletian’s Palace was included in the UNESCO World Heritage List in 1979.

Diocletian was 39 years old when he became Roman Emperor in A.D. 284. He was born in Salona, which is the next place to visit! Or the first? He ruled for two decades until illness forced him to abdicate the throne at the age of 60 and retreat to a spectacular palace on the Dalmatian coast in the modern-day city of Split, Croatia.

What was Diocletian’s Palace used for?

With almost rectangular walls (215 m x 206 m), the palace looks a little like a military camp with its shape – the so-called castrum. The palace had its own water supply, about 9 kilometers long. It is still being used today in the good part and is one of the longest and safest in Europe!

The southern part of the Palace was, in this scheme, intended for the Emperor’s apartment and appropriate governmental and religious ceremonies, while the north part was for the Imperial guard – the military, servants, storage, etc.

How Diocletian’s Palace became A town?

Although Diocletian’s Palace was originally built as the emperor’s summer residence, no one, even the emperor Diocletian himself, could have imagined that there would still be living within the palace so many years after his death. Over the centuries, the inhabitants of the palace and then the citizens of Split adapted these spaces to suit their needs. For this reason, both the buildings in the interior and the outer walls with towers greatly changed their original appearance. Despite that,  the contours of the imperial palace remain very visible.

Asphalt is the name of the position in which Diocletian built his palace and from which medieval and present-day Split originated. But Asphalatos is also a Greek plant name on the Balkan Peninsula, in Solin, and on Marjan. It is a plant ‘Convolvulus’ and flowers in May with pink flowers.
Some say that the name asphalatos corresponds to the ‘brnistra’ –
yellow bush flower, which in May and June shines
all of Dalmatia.

What are the must-see locations of the Diocletian’s palace?

First of all, start your walking Tour from The Golden Gate on the North. Take our advice and Book a Walking Tour of this Palace. From The Gate, a narrow street will take you down to The Peristyle! What a moment to remember!

You will feel like you entered the Diocletian time, and you will walk just either his guard or Diocletian by himself.

The palace itself contains numerous attractions that were once an integral part of everyday life. One of the most impressive is the Cathedral of Sv. Duje ( Saint Domnius).  It was built as a mausoleum of the famous emperor. There is an accompanying bell tower, added in the 13 th century, which is believed to be the most original Dalmatian medieval building.

There are also beautiful facades and gates to the palace – Golden, Silver, Iron, and Bronze. Jupiter’s temple, which many claim is one of the most beautiful European monuments, is on just a couple of steps from Peristyle.

The monument itself is the central square of the palace – Peristyle, and we must not forget the palace’s cellars, which represent one of the best-preserved ancient complexes of this kind in the world.

This can be A very good start of one wonderfull day off – Walking Tour in Split and then hop on the boat!

Basements are also one of the most intriguing parts of the palace and were built to level the level of the southern, residential part, with other parts of the Palace.

The walls served as the foundations of the imperial residential buildings. The shapes of their rooms matched the shape of the buildings that disappeared above the surface. They were probably also used for storage, perhaps even a dungeon space.

Today, basements are used as attractive fair and exhibition spaces. We have to mention that the popular television series Game of Thrones was filmed in them.