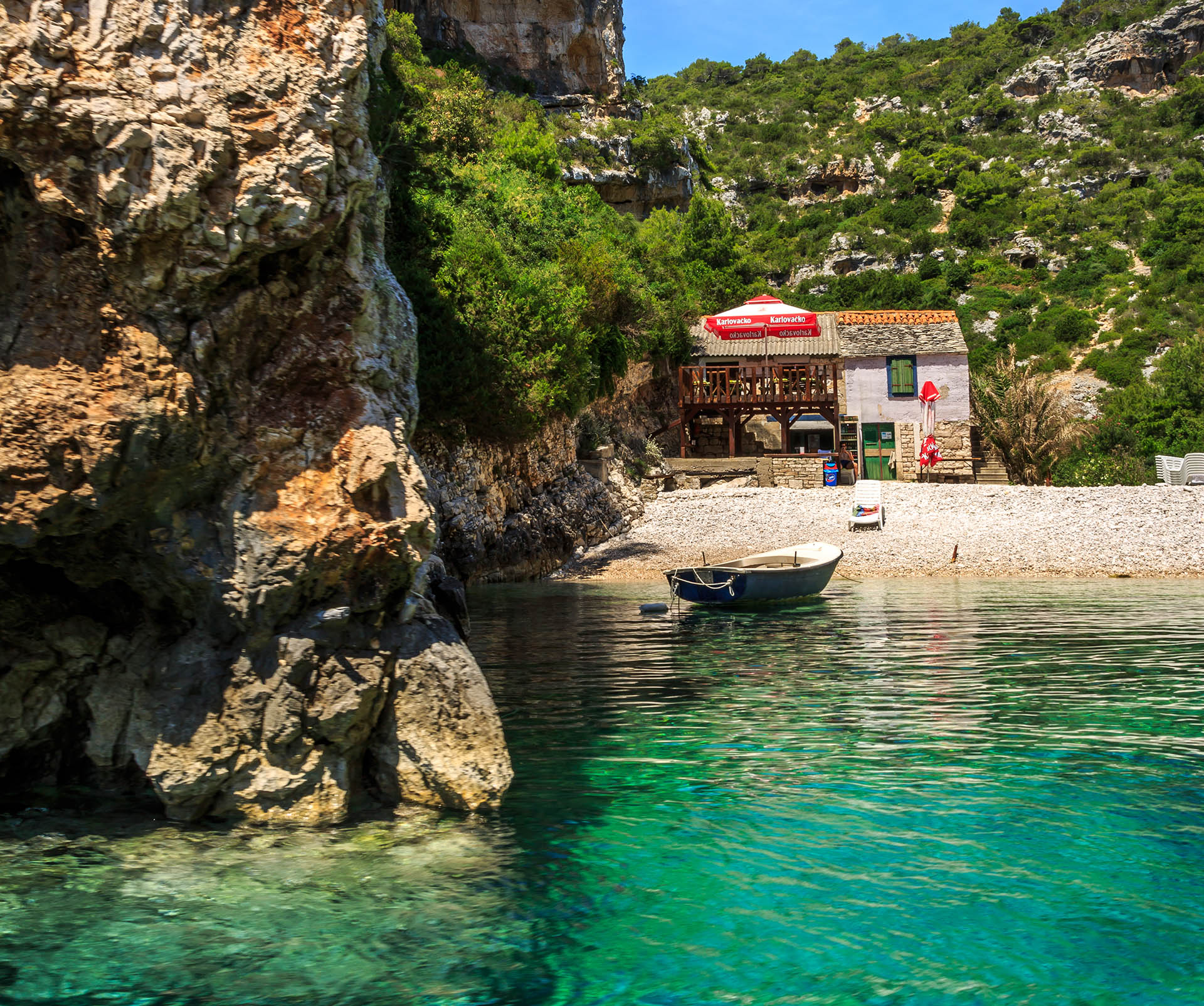 Perhaps the most beautiful island of Adriatic coast and one of the attractions of staying on the island of Vis is its beautiful beaches. An island surrounded by some the clearest blue water . Perfect for family gatherings. Most of the beaches can be reached by car but the best way to see them is by boat on your Blue Cave Tour from Split.

We will list several beaches that will surely satisfy your standards.

The most popular beaches

Once you arrive on  the island of  Vis, wondering where it would be the best to have a great swimming time on a nice sunny day? During Blue Cave Tour from Split you will notice couple beaches that will intrigue you. It is hard to find the island in Croatia where there are so many nice beaches of such diversity. And still on such small area.

Stiniva – an idyllic place to swim

Between the rocky cliffs lies a small pebble beach, with a small cafe set off to the side. At least one half of the bay is always in the shade, because of high cliffs on all sides. The beach Stiniva is usually described as an idyllic place to swim in the crystal clear sea that you will remember forever. The beach is very well traffic connected due to its natural shades so it is suitable for families with the children.

It is hard to find the island in Croatia where there are so many nice beaches of such diversity. And still on such small area.

Srebrna, known to many as the ˝silver beach˝. Srebrna is located in the small town of Rukavac. A typical Dalmatian fishing village. Today, one of the most prominent tourist destination on Vis. It is located on the southeastern side of the island of Vis. In front of the bay Rukavac there are several small islands such as Ravnik and Budikovac.

The beach Srebrna was named after the silvery shine of the pebbles during the moonlight. Srebrna is also one of the most beautiful beaches. It is easy to understand if you have been there at least once.  You will be blown away by its beauty! Large, white stone pebbles instead of sand and then big flatbed rocks at either end of the bay, pine trees that make a pleasant shade, the sound of crickets and a crystal, transparent blue sea. Isn´t that a good reason to visit this beach? It delights families who are looking for a little piece of nature. If you want to relax, this beach is for you. Silent and not too crowded. Suitable for everyone due to the shallow of sea.

The nearest parking lot is located approximately only 250 meters from the beach. There is also a beach bar under the peen trees, where you can eat and drink.

The Stončica bay is located on the northeast side of the island of Vis. Stončica is well known for its beautiful sandy beach. The name Stončica implies the lighthouse and cape, the long bay,  the small fishermen´s and tourist settlement and an excellent restaurant. All these are Stončica bay! Stončica is still the first choice for a  family vacation.

Why? On the beach is situated  a small bar, a volley court and lots of shades under the palm trees on the western part of the beach.

Even 30 meters from the shore the sea is shallow and therefore is an ideal for families with children because they can play in the sand. Access to the sea is very easy and the water deepness is increasing progressively and very slowly which renders the beach and the whole bay suitable for everyone.   The nearest parking area is only 10 to 15 minutes within walking distance of the sea. The shadowing palms are allowing to get a restoring shadow in the hottest hours. A beach umbrella could be recommended anyway.

This Boat trip from Split will give you a good reason to stay longer on our coast!